Even with the fear of jinxing it...

Less than a week and half for me to leave for England... I think I've reached the stage in which I don't feel a thing towards them. I hope I'm right, I saw them both one more time (we went to eat italian, nice restaurant by the way: Italiani's, couldn't finish my meal, jeje, yeah, you win Hugo), and frankly, yeah, it was kinda weird; but, not bad weird, just weird. Hugo still was the silent one, although he spoke a bit more than usual, probably because of the whole deal with their "relationship" now.

I quoted that because, well, it's kind of a mess right now: Julia's ex (whom she met in Queretaro) is still around in Juarez, with a job and all. Not only that, he, up until a week ago, was staying with Hugo; he now has moved with a friend that moved to Juarez from Queretaro. So you can imagine why I'm not in there: not that I want to, if I know myself well, I probably would've jumped in there to stir things up even more. But I didn't; I don't know why, maybe because Hugo didn't let me (although we talked a lot about it), or Julia, or I was just too hurt to include myself in all that shit. The thing is that, well, I'm not in it: I'm being taken more of an external observer. Which in itself is hurtful: I'm not in it, I'm not taken into consideration, I'M NOT CARED FOR. But, it IS for the best: right now I feel ok, the England stuff that I have had to deal with (I'll write about it in later posts) has been a mind and heart saviour. I feel that I'm already there, and I'm the stage of being excited and at the same time frightened by the idea of moving to a new continent. It's kind of a fresh start, a new chance to screw things up, a new opportunity to be remembered but not that much.

It's so weird that I'm typing this with the fear of me deceiving myself, of not actually feeling ok but saying that I am to trick myself into it (y'know, the Julia way). I hate that, I've done it so much up until now that I can't tell the difference between the bull and the grass. Nevertheless, I do feel ok; no more stomach aches (pre-ulcer symptoms; I'm 24, I don't take abandonement easily), I actually can talk with Hugo about this whole situation with a cool and clear head, and I can sit in a room with them holding hands, in each other's arms, and being this close to making out in the room, without killing myself (y'know, just the usual nervous twitch). Yeah, it hurts, being forgotten does that to you, and having somebody that you STILL have feelings for look at you as not being there like before is hurtful (yeah, I still don't know what that's about, sorry; no worries, though, I'm leaving soon, good excuse for not caring, or a good reason for me to convince myself of it). But i'm beginning to see some sort of light at the end, I can sincerely say right now that I'm not over her but that I will someday; I KNOW it, I FEEL it... everyday I feel my heart growing a little bit tougher. I know that this will kill most chances for me to begin a new relationship in the near future, but it's probably for the best; I'm not planning staying in the UK for a very long time, most of which I'll dedicate to studying, so I probably won't have a lot of time for that. But, hey, if somebody is thrown my way, I hope (you hearing me up there?) that I won't be too blind to see her (or him, who knows?). 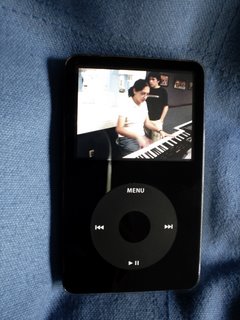 The picture that it's showing is of a friend of mine: Cristina Bringas (I've written about her before).

Here's the back panel: 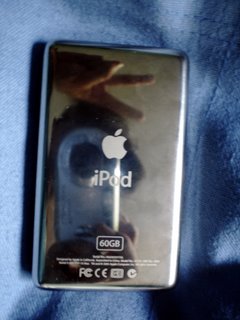 The thing that bought me into it (which I'm very embarrased of not knowing about, being a Mac fan and all) was that it plays video. I've downloaded two videos from the Apple Music Store before I bought it (that I couldn't find anywhere): Banquet from Bloc Party and They from Jem. Both of them played beautifully in the new iPod; a problem arose when I tried to import some other videos that I've downloaded from other sources. I've converted the AVI ones to MPG so that I could import them into iTunes and then do the "Convert selection for iPod" (which took almost half an hour for one video to go through the whole process; and I have almost fifty videos that I want to upload to my iPod, you do the math). Most of the initial MPG videos (with which I was testing, including the ex-AVI and the ones that were originally MPG) didn't have sound but did play in iTunes as well as in the iPod.

After digging in the Internet for an answer, this is what I found: Multiplexed MPEG-1 is bad, and MPEG Streamclip is good. Apparently, a Multiplexed MPEG-1 movie stores it's sound information in such a way that when it's being converted into another type of movie (MOV, AVI, MP4, etc.), the file doesn't bring it's sound with it to it's new type. So, a "demultiplexing" or demux is needed before the conversion, and this is where MPEG Streamclip comes in. Besides converting between a wide variety of types of movies, it also demuxes in the process if needed.

Very nice app, by the way. Just drag n' drop the movie into the square, choose "Export to MPEG-4" in the File menu, a window will pop up, press the "iPod" button in the top right corner which will put in all the necessary options to make an iPod friendly movie, press the "Make MP4" button, write a location and name for the new movie and you're done. This new movie will be ready to be imported into iTunes and will play in the iPod as is (no "Convert selection for iPod" in iTunes needed). Another great thing about this is that it only takes around 15 to 20 minutes for the process of converting a movie to complete; so it doesn't only solves my problem, it also cuts my waiting time in almost half. Oh, and did I mention it's freeware? Yeah, Squared 5 rocks!

Everything was going so well...

I went out, I wasn't thinking about them (well, just a few times each day, which burnt out really quickly), then something that he said hit me...

I don't know what was it, but right now I feel pain, little bit suffocating. I hope it's also a rapid burner.

Robert McLaws writes that apparently pushing back the launch date for Vista 45 more days (enough time for a Beta 3) should do the trick at stabilizing and working out the current issues for Vista.

My comment? Oh please! All the stuff that Robert notes as the things that are wrong with Windows Vista that, he thinks (hopes, rather), can be resolved in that month and a half are stuff that has plagued Windows since the 95 version. The reasons for that stuff is that Window's still monolithic appearing not to be, it's still built upon a browser, the UI is still being designed by engineers (not industrial designers, like it should be), it's still violating every other standard out there to make it impossible to manage. The fact that they are still caring for a launch date, instead of development, makes it obvious that Microsoft is still a business first, a monopoly second, and a software developer third.

A Beta 3 would only stall a launch date, make the users see that this company can't get its act together after all this time, and that, again, Microsoft cannot keep its promises.

But OK, let's say that it's necessary to push the launch date for the sake of the product (and the users, of course)... why only a month and a half? If you want to get it right, push it six whole months, or a year, for that matter. This stuff that you want to resolve won't be resolved in 45 days; it hasn't been resolved in two years! How the hell do you think that another 1080 hours would matter? Microsoft has already pushed it almost a whole year from it's original launch date, why not another, or two? Hell, why not even launch XP SP3 in the process?

If you want an amazing product, the first thing that you need to decide is what's more important: your reputation or your users? Both of them are very important and mutually dependent... Robert wants to mantain both with his comments: delay it, but not too much. I say: if you want a great product, delay it, big time, enough to get your act together; if you want to keep what little good reputation you have left, go for it and keep at least one of your promises! In my opinion, I'd recommend to get your act together and delay it again for a whole year: do a Beta 4, debug your ass off, and show the real abilities of Microsoft... Lord help us if the Beta 2 was it!