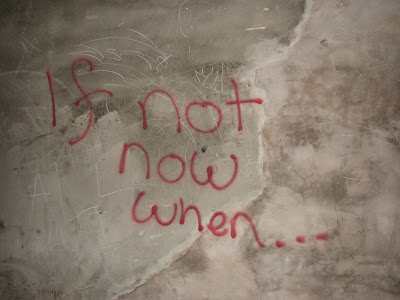 Anybody that knows me well knows that I get most of my revelations through comedians. And I mean good comedians, like George Carlin, Bill Hicks, Robin Williams, Doug Stanhope, Eddie Izzard, and Lewis Black.

I finished hearing the Audiobook of Lewis Black's book "Nothing's Sacred" a while ago; I'm not that much of a reader and it was read by the author which made it an intimate experience. Almost at the end, there's this little chapter after another one in which he tells about the time he went to the Yale School of Drama for his Masters (like I said, good comedian). He was going through a weird time because of some trouble with the head of the department and some teachers we're giving him grief:

Going to the Chapel
"And the Lord spoke unto Lewis, but it was too late."

Since my head was on a continuous spin cycle at the drama school, it made perfect sense that I would get married at this time. The wedding took place in the courthouse of Rockville, Maryland, with just my immediate family and her's.

Directly following the ceremony my brother and I walked out the door just as two officers of the law were passing by with a prisoner chackled between them. I looked at my brother and said:

When God sends you a message, he certainly makes it loud and clear.

The marriage was finished in less than a year.

I'm not saying anything bad of getting married (if you love each other, go for it). This post's more of divine 'messages'... and, yes, when He speaks, He absolutely grabs your attention.