Are you sure that what you know is true?
Click on the following thumbnail, it will open an image on another window that shows a very interesting proof: 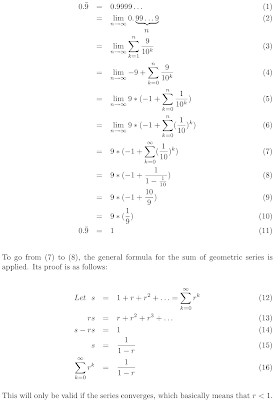 You are free to distribute it, just try and give the link of this post. It is important to note that this proof was observed in the following links:

Some other proofs have been done, but they mostly end up tinkering with the value of 0.999... when it isn't possible; it's like trying to tinker directly with the value of infinity. Actually another hilarious proof is done this way, in which it is 'proven' that 4=3:

The problem here is that a+b-c = 0, so that last step should be 0=0, because both sides of the equality sign is being multiplied by (a+b-c). This is somewhat similar to using 0.999... and then multiplying it by or adding to it something. It is not such a defined number to handle well directly, so every calculation done to it must be taken with a grain of salt. However, if infinity needs to be dealt with, the best way to do it is by applying limits, and, when used properly (like in the case of the proof I chose to show you), there's no denying what it proves.

I tried my best to find a flaw in the logic followed with no success. I think that the thought of 0.999... being just an estimate of 1 has been put over my head for so long, that is difficult to let go... to let go of the past, and the misconceptions that came with it. It's a myth that one number can only be represented by only one decimal number, which gives in to the possibility that the Mathematics that we know aren't as rigid as they are thought to be. And that, in a sense, they are flexible and fluid.

It's a nice thought, and liberating in a way, but frightening in another (coincidentally: just like being in love). It is a test to abandon all gained knowledge and really consider all possibilities. All these apparently obvious paths that seem erroneous can lead to great treasures, but you run the risk of losing yourself in them if they are actually wrong, and looking like a complete idiot in the process. And, from what I've seen, the obviousness and gained knowledge are mostly right (they are taught for a reason). But sometimes, just sometimes, the Universe lets you see that it has a nice sense of humor, and that it likes to fiddle around with its children, surprising them, inspiring them, enlightening them of its wonderfully unpredictable nature.