Sorry for the random subject, I won't have access to the Internet from my room until monday, and I swore to myself to update this blog with something; so I'm doing this from one of the computers in a University PC cluster close to my apartment building and this is the only subject in the list (which are lot, by the way) which I don't need information stored in my Mac to write about. I just wrote to both Hugo and Julia quite extensive emails of how things are doing over here and how I'm feeling (which, in summary, all is good and rainy, I got into my room at last, I've met two of my three flatmates, they're nice, one's from China, the other from Saudi-Arabia, very cool, my parents have just left, scary but cool, and I'm hungry, yes you read it right, I'm hungry which hadn't occurred in quite a while), so don't expect this to be a long post... mmm, judging from the length that it already has... nevermind.

Anyway, I'm a big fan of indoor climbing; I was in the Boy Scouts when I was 10 so they teached me some technique on climbing bare rock and rappel, I was maniatic tree climber (still am when nobody's watching) and I climbed when I had the chance over at Queretaro (the school had a very nice wall on campus). So the first thing that I do when I arrive to Manchester (well, not the first, but, y'know what I mean) is get online and find a good climbing center (which, now that I think of it, is something that I could've done while I was in Mexico... douh!), and here's the one that I've decided upon. First of all, they have a LOT of walls ranging from beginner to advanced, they have walls just for bouldering (which I do a lot) and, this is the best part, it's inside a church. 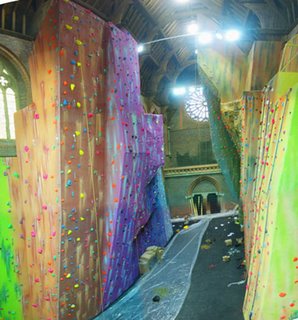 It's not an actual church, it's just a building that used to be one, but the structure and the window work still remains, so it's quite beautiful. 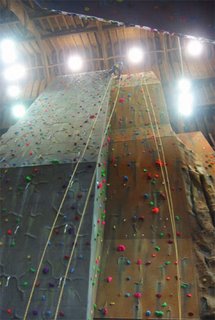 These pictures are from their website. I haven't been there yet, but I will later, beleive me.