Take a close look at this painting: 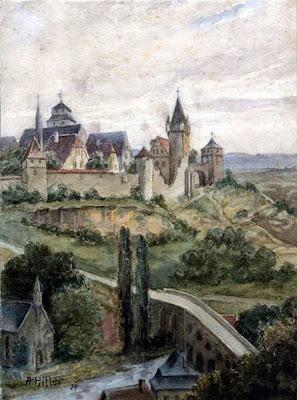 What do you think? Not bad I would say: good use of color (a little bit too gray, but I like it); the sky's weird but nice (good blueish, reddish color). It's a depiction of Laon, France, by the way, and it's author is Adolf Hitler. You can see his signature on the bottom left.

Now what do you think of the picture? ... eery, don't you think?

What changed, though? The author, yes, but what difference does it make? Is a person that is supposedly 'evil' (which, my mother would say, is debatable; weird parents, I know) ultimately cursed in such a way that everything he/she touches is doomed to be flawed? What would happen if history would have portrayed him as just a puppet of his generals (ejem...)? Would this picture be now seen as 'lacking of artistic maturity'? Painting and leading a country are two different things (I can't believe I just wrote that): how come one influences the other?

I've gone through my years absorbing art pieces, specially in music and photography, and every time I come around to something that for me is new, there's somebody else that says "mmm, that sounds/looks like something from such or such person". "Is that good or bad?", I usually reply. "Well, such or such person did this hideous thing!" or "He/she's considered to be a great musician/photographer!" The thing is that I still don't get it: "So?" The conversation usually ends there.

I've talked before about dealing with an argument in such a way that the reputation of the speaker of such an argument doesn't influence the veracity of it. A close-to-passing-out drunk may tell you that drinking like he does can kill you; it will be hard to believe him, I know, but his statement is still true. Ironically, in this case, it may even help the argument along...

However, now I'm looking at it in aesthetic way, in the artistic sense. The way our mind works, for some reason, does not only take in what our five senses are dictating from the piece of art, but filters it by way of what we know about the piece of art. We arrive to such pre-judgmentalism to the point of changing what we feel about a painting just because of who painted it, not because of what is painted and/or its artistic quality. That could very well be what Picasso meant when he said "The quality of a painter depends on the amount of past he carries with him." just instead of 'amount', is 'quality'.

I guess that is why I like about not knowing that much about art or music history. It, in some way, hasn't vaccinated me with such pre-judgment. I'm not saying, however, that I don't pre-judge, I'm human after all: I don't care much for Iggy Pop (put on a shirt, man!) and Nelly Furtado's music at one point wasn't as attractive as it is now that I've truly listened to it. But, at least is nice to know that if I hear The Killers playing Shadowplay in this year's NME awards I won't immediately turned to a bystander and say "these Joy Division wanabes don't know what they're doing". It would be more like "God, that guys sings horrendously!", just to later found out that it was Ian's words all along and that, yes: he may have written the lyrics of the soundtrack of our lives back in the day, but, boy, was that some ugly singing! Yeah, that's right, you read correctly, and I'm not too happy about The Doors' music either... comment away!

Anyway... what I've come to realize is that ignorance's bliss. Not too much though, just enough to have an open mind about the whole thing, and hear/see it with the ears/eyes of a child who doesn't know better, who doesn't know worse... just tries to know from his/her everknowing gut, and just simply likes or dislikes judging from what his naive little heart determines... the mind is way overrated in these kinds of things.