The Road from Hell...

In my latest (and probably last) trip from Queretaro to Cd. Juarez, I ran into what I'm now calling the "Almost Road from Hell". 'Almost' because that "Road from Hell", at least for me, belongs to 10 km between Durango and Mazatlan here in Mexico known as the "Espinazo del Diablo" (literally, the Devil's Backbone) and you need a good stomach to withstand it because, well, take a look for your self: 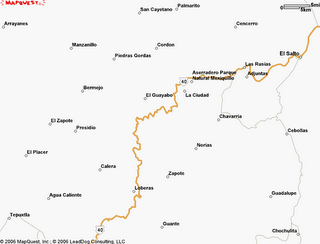 That's an estimate of the land. Look at those curves!

Anyway, the "Almost Road from Hell" is a temporary one (I hope). It's a 65 km long patch of a road starting in the limits of San Luis Potosi city going towards Zacatecas (the blue part): 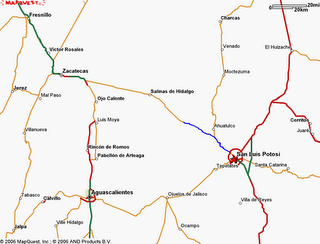 Compared to the Devi'ls Backbone, it may seem less daunting (which, in retrospect, it is), but don't let that deceive you. This "patch" is being repaired, by little chunks at a time. You're welcomed by repaired chunk 2 to 3 kilometers long followed by an unrepaired chunk 10 to 15 kilometers long, then a repaired one, etc. If you're driving in the repaired chunks, you'll be joyfully driving by speed bumps every other 250 m. That's right, speed bumps in a road equivalent to an U.S. interstate highway, with three lanes going each way (Did I say that they were very wide as well as tall bumps? No? Well, they were). If you're driving in the unrepaired chunks, you'll get one lane going each direction (So, talk about a complete deadlock when entering each one of these!) and speed bumps (yes, also) every other 500 m. Because there are a lot of semis and big trucks transporting stuff very slowly, these three factors (one lane, speed bumps, and slow semis) make it near to impossible to pass them, thus, you're forced to go around 20 km/h (~13 mph) for the length of the unrepaired chunk.

After we cleared it, my dad and I did a little math, and this is what we came up with:

This is close to the high speed limit of some residential areas in Mexico!

So, from right now until (I hope) the end of this year: AVOID GOING THROUGH THE SLP-ZACATECAS HIGHWAY, if we could call it that.